Takeshi, in collaboration with his wife, Felicity Aylieff, and Baixu Xiong, make up RedHouse Ceramic Design Studio, a business that represents both Takeshi and Felicity in curating various exhibitions, organizes lectures and workshops, and also serves as a brand name for the ceramic design market. Baixu heads the business outreach, curatorial work and manages the studio as well as the two showrooms in Jingdezhen. Every Monday she calls a meeting to discuss the goals of the week ahead. At our first meeting, I got to meet the two RedHouse studio assistants Jiang Hai Jiao and Zeng Lin, but, unfortunately, I was unable to meet Felicity. Currently, she  teaches at the Royal College of Art in London and was in the UK for the duration of my trip. After the meeting, I was put to work. 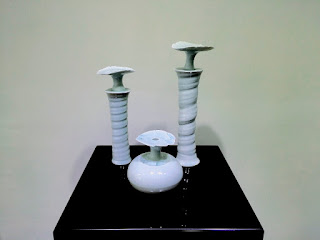 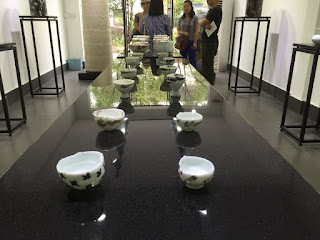 When I arrived, RedHouse was in the process of developing three different sizes of slip-cast tea cups and a new Chinese-style tea pot. I was assigned to make 30 molds, 10 each of the three different sized tea cups. He had a 9-part case mold made for each of the cups. A case mold is made out of a stronger type of plaster and is used only to make multiple pottery molds. The process is basically to assemble the case and remove the part that you want to make out of pottery plaster. You then mix the necessary amount of plaster and pour it into the void you’ve made in the case resulting in a freshly made piece of a new slipcase mold. I was unfamiliar with the process and eager to learn. Each day, we would break for lunch, have afternoon tea, and greet Takeshi’s constant influx of visitors coming from all over the country. Between all of this, and the task at hand, somehow, I was still able to find time to get out and explore the surrounding city. 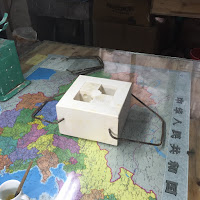 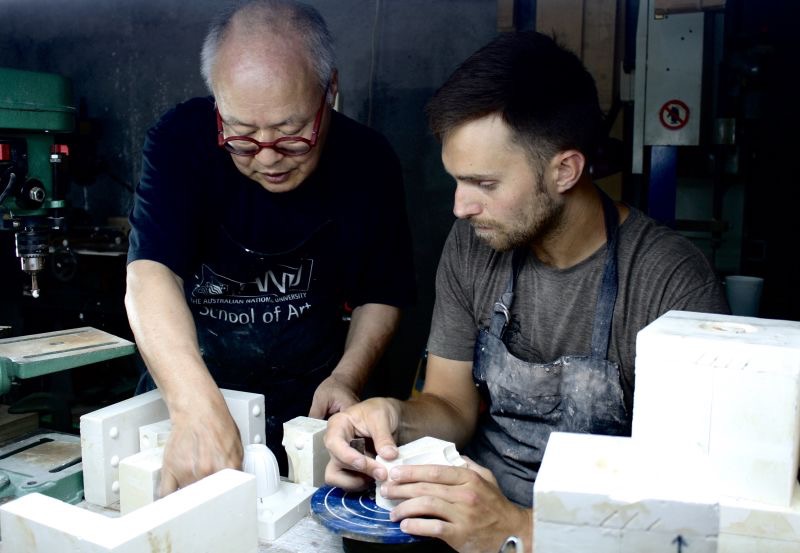 Takeshi’s studio was located in the “sculpture factory,” which was really more of a neighborhood than a factory. t was a perfect place to witness the division of labor in the traditional production of Chinese porcelain – each specific task necessary to create porcelain wares is  delegated to an individual specialist. There are throwers, trimmers, mold makers, glazers and kiln operators, just to name a few. The city works together as a network of workshops that pass on the work in various stages of completion. I was amazed to find that almost every shop happily allowed me to walk right in and see what they were doing. I was often invited to sit down for a chat, or more accurately a game of charades, thanks to the ever present language barrier. 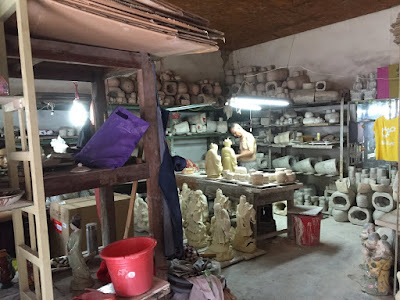 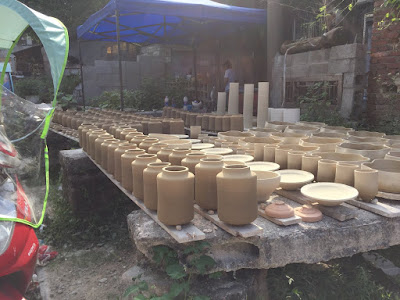 A days work drying out in the sun

On one occasion, I stumbled upon a jigger jolly studio. A jigger and jolly is a piece of equipment used to rapidly make pottery pressed into a symmetrical plaster mold. Initially, I was drawn to the workshop by the piles of molds outside of the front door, stacked six feet high and extending  the entire length of the building. Once inside, I was surrounded by towering stacks of molds and freshly made plates. The craftsman in the workshop, who seemed to always have a cigarette hanging off his lip, made 10 giant platters during the few minutes I was there. They were added to an impressive stockpile and, soon, I learned why he had to be so prolific. As I continued exploring the surrounding workshops, I saw the large platters all around the sculpture factory, in glazing workshops and artists studios. They sold for cheap and were clearly in high demand. Also, I saw a lot of mold making workshops and kept comparing my technique to theirs. 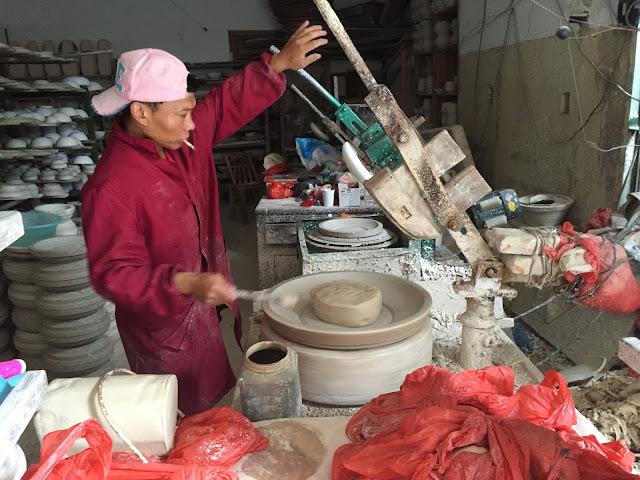 A jigger and Jolly operator at work

The sculpture factory’s work-flow attracts artists from all over the world who want to utilize the local porcelain. I met one artist from Melbourne named Juz Kitson who keeps a studio space in Jingdezhen and works there for a few months out of the year. When I visited her space it was overflowing with components, ranging from watermelon size down to little, tiny porcelain dots. Downstairs from her was a charming Swede, Torsten Jurrell. At the time, he was testing the capabilities of the local mold makers by trying to re-produce a torso sculpture that stood about eight feet high. 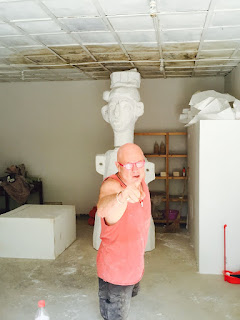 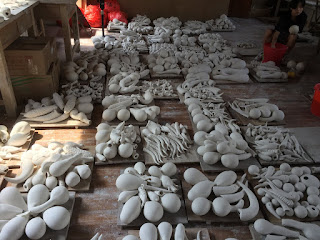 The Pottery Workshop International Residency Program brings in even more international artists to Jingdezhen to complete short or long term residencies. The program’s beautiful studios are on the third floor, offering great views of the city and close access to all of the workshops around the sculpture factory. There, I made fast friends with Gus Clutterbuck, another Aussie who was busy making delicately decorated porcelain NFL football sculptures. I also found Pru Venables, yet another Australian resident at the PWS. She happened to be old friends with Takeshi and Felicity and would join us every morning for breakfast. Along with hosting the International Residency program, the Pottery Workshop has a community outreach program that offers classes to the general public. The program is run in conjunction with West Virginia University, giving American students a chance to study abroad and earn college credit back in the states. The students make work, help keep the studio running, and get a sense for how things works around the sculpture factory. It would be an understatement to say that Jingdezhen is a great place to work in clay, and just as great a place to meet new and amazing people.


As I worked alongside Takeshi, I was always conscious of the stark contrast between the way he worked and the buzz of the surrounding sculpture factory. He was distinctly aware of, and probably influenced by, his surroundings. The way he used the potter’s wheel and plaster was deliberately counter to conventional practices of the workshops that were right outside our window. His pots were more personal and compelling. For example, take a simple slip cast cup. The form is recognizable, but Takeshi chooses not to clean the part line from the two halves of the mold, in fact, it’s deliberately accentuated, meeting the  handle that was carved out of the plaster mold. The cup has the remnants of touch that are subdued, but eventually become too obvious to neglect. The mark of the maker becomes evident and adds a communicative element to the morning ritual of coffee. He told me that he considers himself an amateur surrounded by professionals. He still learns from his practice every day and works very slowly. It’s not to say that his practice is less important, or devalued. He reminded me that amateurs built Noah’s Ark and professionals built the Titanic.
Email ThisBlogThis!Share to TwitterShare to FacebookShare to Pinterest